The film explains why a famous Japanese writer, who was close to getting a Nobel prize in literature committed a ritual suicide by seppuku inside the Tokyo headquarters of the Japanese Ministry of Defence.

In the 70’s Yukio Mishima founded a military society which mostly included students and strived to regain the power of the Emperor and revive a traditional Japanese society. The society had bushido philosophy behind it, which is a set of moral rules, traditionally followed by samurai. According to wiki, Bushido stressed frugality, loyalty, mastery of martial arts, and honor to the death. Under the bushidō ideal, if a samurai failed to uphold his honor he could only regain it by performing seppuku. 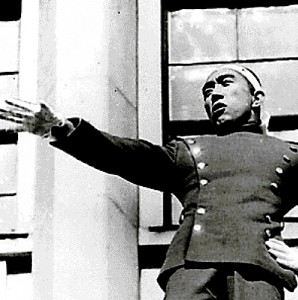 Mishima delivering his speech in the failed coup attempt just prior to committing seppuku (November 25, 1970)