After spending quite some time at sea a sailor goes ashore to visit his family leaving in an isolated mountain village in Argentina. And the way is long and snowy.

Instead of feeding the spectator with information and guiding him from one scene to another creating all the necessary connections, Alonso chooses a different approach. He shows the characters in their natural environment, just how they do their everyday life routine. And he it slowly enough for the viewer to form his/her own interpretations without being leaded by the director too much. 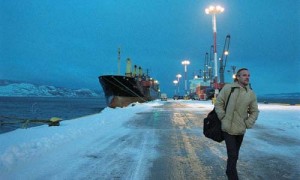 And this slow pace I personally see as something even necessary. When Farrel rides home on a bunch of  logs, you need to see that it takes quite long, and that it’s cold, and that it’s not that fun. This is just how it is and it gives you space to observe and to interpret and to try to understand Farrel’s state of mind. It reminded me of Gus  Van Sant’s “Gerry” , where two friends were endlessly wordlessly wondering in the desert (not that much happening when you’re lost in the desert, right?). 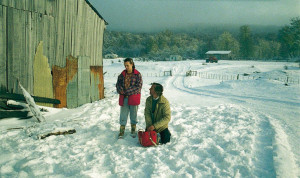 This Liverpool souvenir he gives to his daughter in the end looks like a sad jock really with banality and absurd mixed in this cheap thing. And while not that much happens during the film, it  perfectly reflects  loneliness and some unsaid  dead ends of life Farrel, a wondering singleton, is facing.

I’ve read in one article that Alonso once said  he would never become a director himself if he did not see Taste of Cherry, -I wonder why.

Some ideas borrowed from: