Well in fact even he  does not, when he is  priest looking Thai policeman who ensures justice by cutting away arms, piercing eyes with a fruit knife and pleasing his subordinates’ ears with his sweet love songs in a karaoke bar afterwards. The amount of blood and violence reaches the point when an experienced gore/slasher films lover should be satisfied. But despite that human internals falling out made me physically sick, it  is a good film. 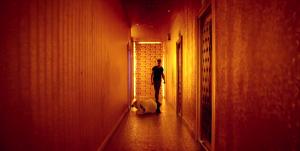 Two brothers from US own a fighting club in Bangkok (or a “fag fighting club” as their rather bitchy mother calls it). One of them for unknown reasons rapes and kills a 16 years old prostitute and keeps on sitting in the blood soaked room. In this very room  he gets killed by the girl’s father, then  father’s arm gets chopped of by the early mentioned police guy, and so on.

But violence here is  esthetic – Asian ornaments in red light, shiny sword, music, rhythm, montage – all just clicks together. Tarantino, who by the way borrowed his famous Kill Bill snow fight scene from Lady Snowblood (1973), will definitely get jealous. 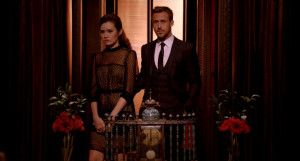 This Thai policeman  seems to have a very specific “eye for an eye” understanding of justice. He knows precisely just what to cut away for this or that misdeed.  Can’t look well after your daughter? He’ll cut your arm away. Don’t see what is good for you? Say bye-bye to your eyes. And as God is supposed to see everything, nothing stays unpunished.