Due to the economic crisis hitting Japan, a lot of people get downsized and fired. Ryûhei Sasaki, who is one of them,clears his working table into a plastic bag and brings his wife the last paycheck of his well-payed management job. Being ashamed of the situation he hides the truth from her and pretends to be still going to work every day. On one of these humiliating looking-for-a-job days he meets his ex-classmate who already mastered the art of acting as if he still had a job to the top.

In a meanwhile his wife gets stolen by a loser-bugler and his younger son secretly attends piano lessons paying for it with his lunch money.

Sonata- a composition for one or more solo instruments, one of which is usually a keyboard instrument, usually consisting of three or four independent movements varying in key, mood, and tempo.

Sometimes funny, but in the end quite a sad story of how hard times reveal family’s sublime problems – looks like they hardly know each other. 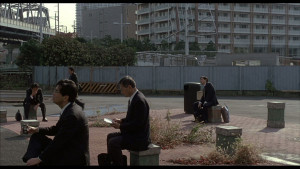